Kathryn is an accomplished speaker, having given more than 200 talks about Marguerite LeHand, the Roosevelts and other American history topics at venues including the FDR Library and Museum in Hyde Park, New York, the National World War II Museum in New Orleans and dozens of civic clubs, book clubs and senior communities in twelve states. In her talk about Marguerite LeHand, she performs in period costume in the persona of the famous woman, giving a sassy and humorous low-down on life with the Roosevelts. Her talk on Gertrude Sanford Legendre is punctuated with hats, from a pith helmet to a designer chapeau, like the ones the real Gertie wore. 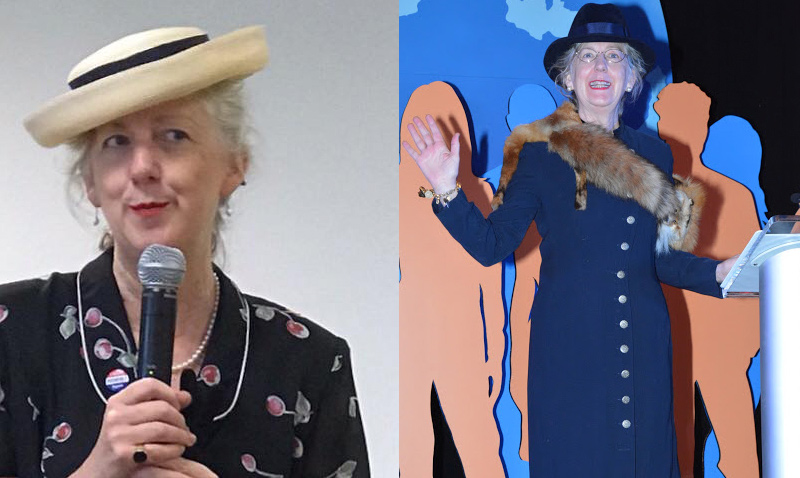 Missy LeHand Tells All.
Marguerite A. LeHand worked for President Franklin Roosevelt for more than 20 years as his private secretary, counselor, confidante and friend. In this presentation, Smith wears period costume and speaks with Missy’s Boston accent about her time with FDR (photo at left). Mid-talk, she removes Missy’s hat, tells “the rest of the story,” about Missy’s life and the writing of the “The Gatekeeper,” her biography of LeHand (2016, Touchstone of Simon & Schuster).

The Many Lives of Gertrude Sanford Legendre.
Aiken County native and long-time Berkeley County resident Legendre lived a big life.  She was a New York rich girl and debutante, equestrienne and big-game hunter, flapper and party-goer, explorer and naturalist, society bride and socialite, South Carolina plantation owner and hostess, World War II OSS manager and German prisoner of war, philanthropist and grande dame of Charleston society and, finally, a conservationist. Follow the 20th century with Gertie, who was born in 1902 and died in 2000. Biography to be released September 2019. Illustrated lecture.

The Marriage of Franklin and Eleanor Roosevelt.
One of the first true “power couples,” the Roosevelts were leaders of tremendous influence in the twentieth century, leading America for 12 tumultuous years, from 1933 to 1945. Eleanor Roosevelt is usually credited with creating the role of the modern First Lady. However, their marriage was a difficult one, marked by betrayal, bitterness and anger—right until the president’s death. Illustrated lecture.

How FDR Vanquished Polio.
Few Americans remember that FDR, besides leading our country through the Great Depression and World War II, was also the founder of the National Foundation of Infantile Paralysis, better known as the March of Dimes. This charity fought the terrible scourge of polio with both assistance to the stricken and research to find a vaccine, finally working itself out of a job when the Salk Vaccine was perfected in 1955. This is a lively, personal look at the polio crusade — which continues today to mop up the last of this disease in third world countries. Illustrated lecture

The Women of Prohibition.
Women had major roles in Prohibition, the period when it was illegal to buy alcohol in the United States, lasting from 1920 until the end of 1933. The women’s temperance movement brought it into being, a female assistant attorney general was its chief enforcer, and a New York society woman led the movement to repeal it. Illustrated lecture.

How Shirley Temple Saved America.
The little actress was the nation’s top box office draw during the worst years of the Great Depression and helped Americans forget their troubles as she sang and danced away the troubles of the characters she played. She worked through her childhood, while her parents spent her money, but went on to successful later careers as a television actress and diplomat. Illustrated lecture. Illustrated lecture.

With Much Love, Noble: An Ambulance Driver’s Letters Home from the Great War.
Noble Page enlisted in the U.S. Ambulance Service shortly after America entered World War I, training at the same camp as the writers Ernest Hemingway and John Dos Passos. Page served for eighteen months, ferrying sick and wounded men from outposts to field hospitals, dodging bombs and being strafed by planes. His letters give us a vivid picture of the cost of this war, which consumed men like a meat grinder, as well as the lighter aspects of life at the front. Illustrated lecture.

*An honorarium for these lectures can be paid by the S.C. Humanities Council as long as the applicant is a nonprofit organization and the lecture is free and open to the public (exceptions being made for retirement communities). A $250 in-kind match is required. Visit https://schumanities.org/projects/speakers/